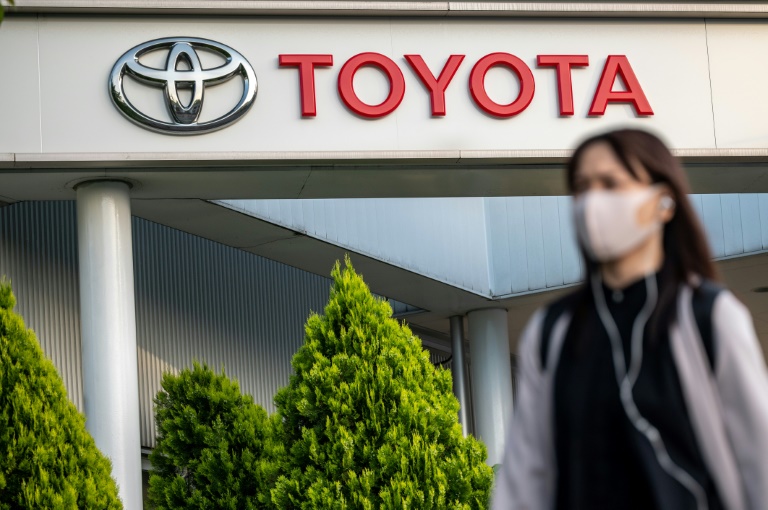 Toyota posted record full-year net profit on Wednesday, helped by strong sales and a cheaper yen, but issued a cautious outlook as the pandemic and war in Ukraine disrupt supply chains.

The Japanese auto giant, which retained its crown as the world’s top-selling automaker in 2021, reported net profit of 2.85 trillion yen ($22 billion), up 26.9% from the previous year.

But for the current year to March 2023, it said it expected to post annual net profit of 2.26 trillion yen ($17.3 billion), citing continued uncertainties.

Toyota said its strong results were due in part to favorable exchange rates, with a cheaper yen helping to boost profits from overseas sales.

On Tuesday, it announced it was suspending production at its eight domestic factories for six days due to the impact of China’s strict Covid measures – particularly in economic powerhouse Shanghai, which has been on lockdown since April.

The shutdown forced Toyota to cut its global production target in May from 50,000 units to 700,000 vehicles, the latest in a series of revisions.

Operations were also impacted by an earthquake in Japan and a cyberattack on a Toyota supplier.

The company has set a production target for the current fiscal year of 9.7 million units, after hitting a revised target of 8.5 million units for the year to March 2022.

“We have set our production volume assumption at an appropriate level, with safety and security being our top priority,” Toyota said.

“We expect a decline in our operating profit due to unprecedented increases in material and logistics costs.”

Russia’s invasion of Ukraine was the most unpredictable factor so far, said Masayuki Kubota, chief strategist at Rakuten Securities.

“The chip shortage and the impact of Covid are issues that have been around for a while and have dragged on, but the biggest problem is Russia,” he told AFP. .

“The development of the situation in Russia is unclear,” so companies should issue cautious forecasts for the full year, he added.

In March, Toyota announced it would suspend operations at its sole plant in Russia and stop shipping vehicles to the country, citing “supply chain disruptions” linked to Moscow’s assault on Israel. Ukraine.

Its St. Petersburg plant produced around 80,000 vehicles last year, mostly for the Russian market and representing only a fraction of the 10.5 million vehicles produced worldwide by the Japanese group.

Other factors, however, are likely to be more positive for the automaker, including a decline in the yen which has touched 20-year lows against the dollar in recent weeks.

A weaker yen inflates the value of Toyota’s overseas earnings and some analysts believe it will help the company and other Japanese automakers offset some of the challenges of the current business environment.

Rising commodity prices could also be a boon, Kubota said.

“Soaring gasoline prices have in the past worked in favor of fuel-efficient Japanese gasoline cars,” he said, though more expensive commodities may also affect production costs.

Like other automakers, Toyota is still grappling with the impact of a global shortage of semiconductors, an essential component of modern vehicles.

Toyota has found itself unable to escape the crisis, but still appears to be in a better position than some rivals, having developed strong ties with domestic suppliers after the 2011 earthquake and tsunami in Japan.

“Its recovery is faster than that of its competitors, even in the face of chip shortages…the company has maintained direct discussions with its suppliers,” said Eiji Hakomori, automotive industry analyst at Daiwa Securities, in a statement. ahead of Toyota’s results.

Apple and 3 other stock insiders sell