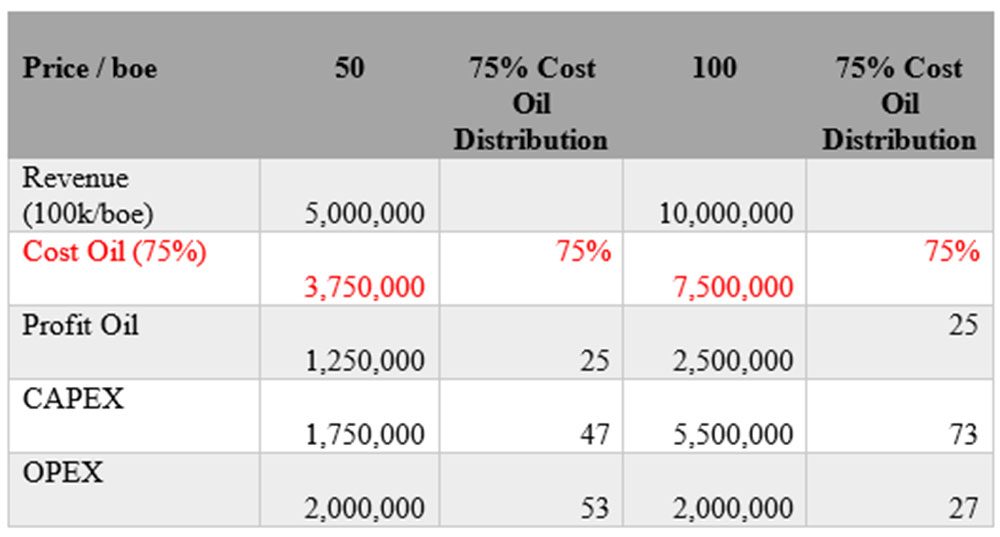 Reference is made to Professor Hunte’s letter dated October 6, 2022, published in the Stabroek News on Oil Cost and Profit Shares. With all due respect to Professor Hunte, he continues to baffle me with his “applied economics” when it comes to the Production Sharing Agreement (PSA) for the oil and gas industry. In his recent missive, Professor Hunte claims that with the 75% cap on the cost of oil, when the price of crude goes from $50 a barrel to $100 a barrel, the cost per barrel increases relative to the increase price. He went further by wondering how the 75% was determined and why wasn’t it 50% or something else?

Editor, if Professor Hunte weren’t an economics professor, I would have been more sympathetic to him. However, in his most recent letter, I have great difficulty in characterizing the claims in it as “magicnomics” and NOT economics, which baffles the mental faculties of intellectuals and also confuses the mind. from a layman. Professor Hunte has no idea how the PSA fiscal terms work, the purpose of the 75% cost cap, how costs are allocated, and what cost elements make up the 75% cost cap.

Let me explain. The 75% cost cap includes two cost elements: (1) the recovery of capital expenditures (CAPEX) that were initially invested to explore and develop the oil fields for production and (2) the costs of operations (OPEX). The 75% cost cap essentially has two advantages for the country and the oil companies, as explained below:

This allows for faster recovery of capital investment (CAPEX) by oil companies and by doing so society and the country would be able to reap a higher profit share sooner rather than later.

The second advantage is such that it allows the development of new commercially viable oilfields and the exploration of new oilfields since oil companies are able to recoup their investment quickly.

For illustrative purposes, the table below shows how this would work (as explained above) in practice.

The table above shows the cost oil allocation in terms of how much of the 75% is allocated to OPEX and how it is allocated to CAPEX recovery. Typically, OPEX, consisting of both variable and fixed costs, would remain relatively constant in any given year and is likely to experience marginal year-on-year (YOY) increases. For example, if in a given year the OPEX is $2 million as shown in the table above under the price scenario of $50 and the revenue scenario of $5 million per 100 000 barrels of crude, OPEX represents 40% of revenue and 53% of total cost, which is capped at 75% of gross revenue. In the second scenario, if the selling price of a barrel of crude goes from $50 to $100, the OPEX would remain the same for this period but would represent a lower percentage compared to the gross income and the total cost.

It is therefore understood that if 53% of the total cost of the 75% cap, which is the total cost of a given year, represents OPEX, then the remainder, i.e. 47%, would be allocated to the recovery of the costs of the initial investment. /CAPEX. More so, as the second scenario shows, with a price increase from $50 to $100 per barrel of crude, while OPEX would remain relatively constant (unchanged), the amount allocated to CAPEX recovery would naturally be higher, which means an even faster recovery of CAPEX. Once CAPEX is fully recovered, the only remaining cost deduction would be OPEX, which is relatively low (12% to 30% of revenue). As a result, there will be a higher profit share that accrues to both parties.

The overall goal is to recover the investment cost more quickly, encourage future development of additional resources (new oil fields) and ultimately achieve a higher profit share towards the end after fully recovering the cost. of investment. Essentially, the country and the companies accumulate much more long-term value by developing and freeing up more resources in the future. This, in turn, prolongs the life of the industry as long as the industry remains commercially viable and to the extent that oil and gas resources that are limited are available in abundance. In other words, the proven reserves of the Stabroek block to date are estimated at 11 billion barrels of crude. Thus, with a production rate of 1 million barrels per day (at the end of this decade) or 360 million barrels per year, the total proven reserves of 11 billion barrels of crude will be exhausted in 30 years. That said, with exploration going on over the next few years, if there were to be new discoveries of an additional 11 billion barrels or more, then effectively the life of the industry will be extended another 30 years. , all other things being equal.