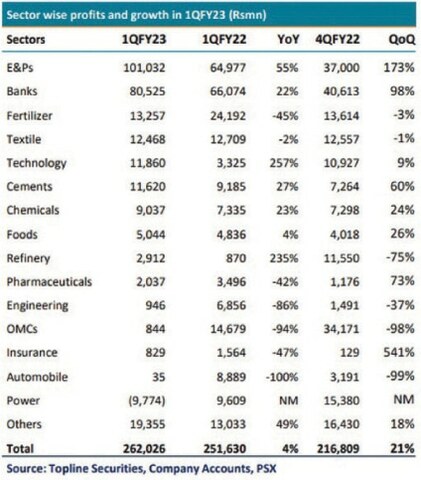 KARACHI: The rate of increase in quarterly profits recorded by major companies listed on the Pakistan Stock Exchange (PSX) has slowed to three-quarters of the five-year average.

Profits of representative companies in the business sector rose 4% year-on-year in July-September to reach 262 billion rupees, according to data compiled by Topline Securities. The net income expansion in the latest quarter is “significantly lower” than the five- and 10-year annualized growth rates of 16% and 11%, respectively.

Speaking to Dawn, Umair Naseer, associate director of brokerage for research, said the slowdown in profitability growth in July-September was due to two main reasons: higher taxation mainly in the form of a super tax and the global economic downturn.

Major contributors to the overall 4% increase in profitability include the oil and gas exploration sector. Its profits increased by 55% in the quarter under review to reach 101 billion rupees. Banks’ profits rose 22% to 80.5 billion rupees while those of technology companies rose 257% to 11.8 billion rupees.

Other notable contributors to the listed segment’s profitability are cement (27pc), refining (235pc) and chemicals (23pc) even though their share in rupees was not that large in total profits.

Sectors that have tarnished the listed segment’s overall profitability include power generation and distribution. Its constituents reported a loss of 9.8 billion rupees in July-September against a combined profit of 9.6 billion rupees a year ago.

Oil marketing companies’ net income was down 94% on an annual basis due to inventory and foreign exchange losses. The decline in fertilizer company profits was 45% due to lower urea and DAP levies coupled with lower gross margins, the data showed. Profits in the auto sector slumped almost 100% year-on-year – from 8.9 billion rupees to 35 million rupees – due to lower car sales and lower gross margins.

Overall profit growth in July-September reached 21% compared to the previous April-June quarter. However, pretax profits fell 18% on a sequential basis due to a slowing economy, higher interest rates and nationwide flooding, he said.

The brokerage offered its analysis based on earnings reports from 90 of the 100 companies that make up the KSE-100 index. These companies represent 98% of the market capitalization of the index and therefore the remaining companies will not have any significant impact on the trend of profitability growth, he said.