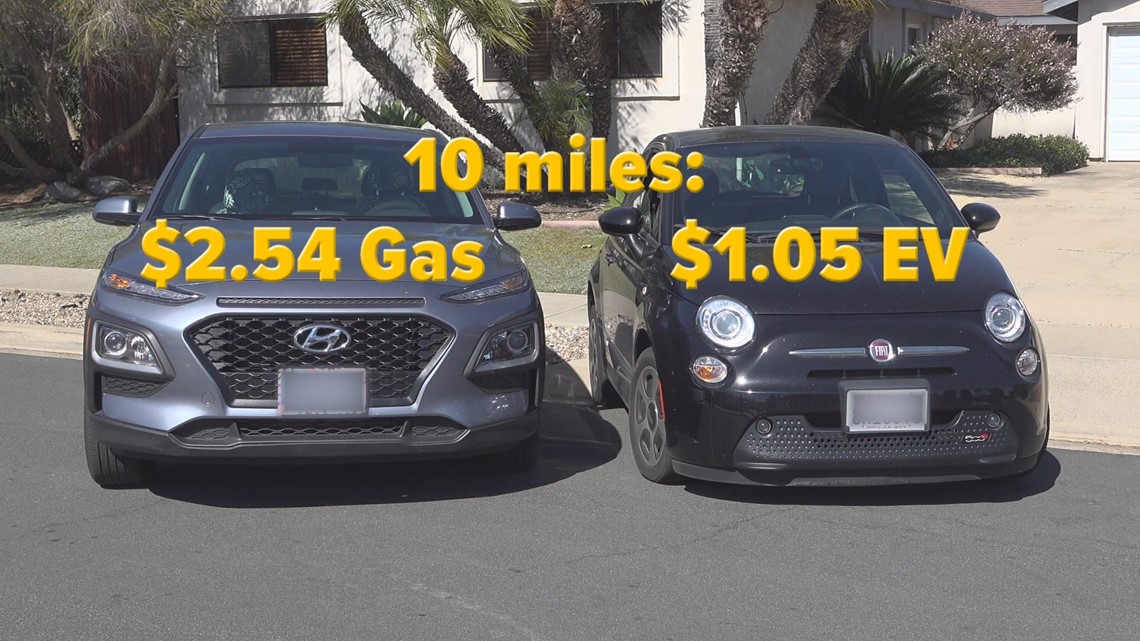 Locals talk about the challenge between gasoline and electric vehicles

The car showdown showed that electric vehicles were cheaper to drive than gasoline-powered cars.

SAN DIEGO COUNTY, Calif. – We received a huge response from CBS 8 viewers regarding our recent report comparing the cost of driving a gas-powered vehicle versus an electric vehicle.

These questions are sure to come up as California transitions to all-electric vehicles in the years to come.

In our previous report, we drove 10 miles in a gas-powered vehicle and an electric vehicle, which cost us $2.54 in gas for a Hyundai Kona and $1.05 in electric for a Fiat 500 EV.

After driving 10 miles, it took 2.88 hours to recharge the Fiat with a charging rate of one kilowatt per hour.

“So it took almost 3 hours to fully charge for 10 miles? What if you wanted to visit your family in Vegas?” viewer Larry S. posted on the CBS 8 Facebook page.

“It was good that you used the daily price of electricity for your test, because when CA has millions of electric vehicles charging overnight, it will be peak time,” David S. wrote in an e -mail to CBS 8. “And we all know that utilities raise rates during times of peak usage.

“If electric cars don’t use gas, they won’t contribute to paying a gas tax…to help maintain our roads and bridges,” Bill B. posted.

Several viewers posted comments like this from Gavin B.: “The real question is, will our power grid be able to handle millions of electric cars all on charge?”

Cal-ISO, the state’s electric grid operator, estimates it will cost more than $30 billion over the next 20 years to upgrade the grid so it can handle millions of electric vehicles and fully renewable energy, in a draft report released earlier this month.

“If they’re uncomfortable now with their rising electric bills, wait. It’s going to be much, much more,” said Gary Ackerman, an electrical and utility expert with more than four decades of industry experience.

Ackerman said the $30 billion estimate to upgrade the state’s electric grid did not include the estimated 1.2 million electric vehicle charging stations needed by 2030.

“My calculations indicate that over the next 20 years, average rates will increase for consumers by more than double, perhaps more than 140%,” Ackerman said.

A partial solution, Ackerman suggested, would be to allow the private sector to install and maintain the charging stations, as opposed to investor-owned California utilities.

“Certainly, utilities will have to be prepared to have a system in place for people to charge their vehicles at home,” Ackerman said. “I think the best way to do this is to have a competitive market where private charging station providers can compete for the right to your business. Then they take the risk.

Last year, the California Public Utilities Commission (CPUC) released a report that estimated SDG&E rates will continue to outpace inflation and rise an average of 4.7% per year through 2030.

“Buckle up, we’re about to see a lot more,” Ackerman said.

Another possible solution would be for the CPUC to reduce allowed equity profit rates on capital investments made by California utilities. Currently, SDG&E’s “return on equity” profit rate is set at 10.2%.

Utilities maintain their profit rates need to stay above the national average to attract capital investment and because of the high risk nature of their business.

As CBS 8 previously reported, SDG&E is embroiled in an ongoing legal fight within the CPUC to prevent its equity profit rate from automatically dropping in 2022.

WATCH RELATED: Treasure hidden under the Salton Sea could be in the next car you buy (February 2022)

Can you get a payday loan with a credit score of 550?