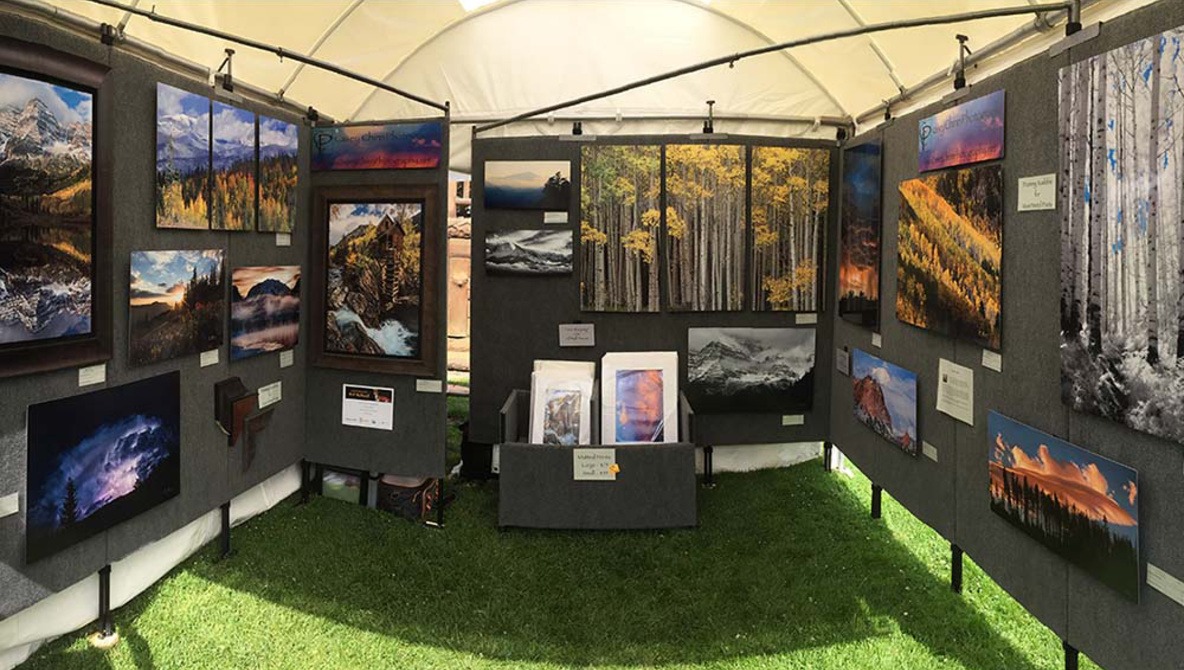 After a decade of selling my work at art festivals, I discovered that beyond the money I earned, I also received valuable lessons for both my career and my life. life..

This article is primarily intended for anyone interested in continuing to show their work at festivals. I hope my experiences and ideas will be useful.

I remember going to an art festival in Aspen, Colorado a few years ago. As I was setting up my booth and getting ready for the weekend, a man approached me and started asking me questions, like how much money I expected to make and how long the festival lasted. Later, I wish I had spent some time answering more fully because I had a distinct feeling that the source of his questions was the illusion that the artists at art festivals are there to do a slaughter and that this was easy money. Of course, nothing can be further from the truth. And while I’ve had some pretty lucrative art festivals, I’ve also had my fair share of hiccups, which this particular festival unfortunately turned out to be. But being in the middle of setting up my festival booth under the hot July sun, I didn’t bother to let her know the reality – only at the end of the day, or on the weekend. This business is more than just putting up a tent in a park and watching what happens.

For example, I could have started by letting him know that before making a profit, there were, of course, expenses to pay. The first of these is the booth price for renting that 10 by 10 piece of grass in the park, which in this case was $ 500.

Plus, it was an out of town show for me in a richer part of the state, so my food and accommodation costs were a bit higher than usual. Then there were the gasoline and maintenance costs for my SUV which I use to haul my utility trailer full of prints and an exhibition stand over a mountain pass to this location. .

With all of that added on, I couldn’t even count on being in the dark until the first $ 1,000 had been earned. And not a penny of that $ 1,000 is guaranteed. In fact at this particular festival I did poorly and didn’t get all my money back so the whole experience ended up being a bit expensive laborious vacation in one of the nicest areas of State.

Oh, yeah, what about that exhibition stand and those walls that I was putting up? Over $ 2,000 invested in all of this.

Going to art festivals has helped me realize that selling my art in a meaningful way is a business. Before doing my first one, I started my business as an LLC, bought insurance, and then started paying sales taxes. Before that I was just someone who took care of it and occasionally sold work in a cafe or small gallery show, but now I was an LLC.

Get to know who your customer is

This has been very valuable to my business. Standing at my booth at an art festival for two or three days and chatting with people was a great way to find out which images resonate the most and why. Getting this first-hand experience helped me refine what I had to offer, and it helped me refine my marketing efforts because I know a little bit about who my best clients are, like in which bracket. age they belong to, what other interests may be, where they live, etc. You can never know for sure who is going to buy your work and who isn’t, but it’s good to have a place to start.

This is another advantage on the marketing side of businesses. Over time I have built a list of people who love my work and love to see new images and hear about trips I have taken or upcoming festivals I might come to. Having a good mailing list is the backbone of any art business, and doing festivals is something that has helped get it started for me.

Another benefit of building a mailing list is that sometimes if the print sales just aren’t there, I can at least walk away knowing that I’ve added multiple people to my mailing list and to my fan base. It’s one of those things that can pay dividends in the future.

All shows are not created equal

Like I said before, this particular festival was a dud for me, which meant a small number of sales that weren’t enough to make up for the expense. But the next one was much better. I have discovered over the years that it is a balancing act. I’m trying to find shows where the patrons are willing and able to spend the money, and yet I don’t have to spend an arm and a leg just to be there.

I’ve made shows that look on paper like they should be fabulous, like the one from Aspen, and left with little to show. I did others that were much smaller and in less luxurious areas and were very successful, especially considering that I had lower expenses to make in order to make a profit. For me, a small, well-run exhibit with just a few other photographers will almost always be better than a well-known large exhibit with more landscape photographers than you can get.

Don’t be afraid of the competition

One thing I learned early on, especially trying to get into the more lucrative exhibitions, is that there are a lot of talented photographers out there. A lot. It was easy to see other photographers at the lounges, some of whom had very large double booths with huge prints and felt a bit intimidated. Over time, I have come to accept that it is only a reality to do this type of work. I also try to learn what I can from people who might be more advanced than me and I am confident that if my job is different enough from theirs, I will find my market.

Finding your style is crucial

This leads to the next point. It’s so important to find your style. This is what will help you find a market for your photography and set you apart from the competition. Much like the virtual world, the world of in-person art exhibitions is full of great work. Developing your own style is essential to making yourself stand out. It’s the one I’m still learning and it’s probably a lesson of a lifetime.

Don’t waste time comparing yourself to others

This goes directly to the last point. It’s easy when chatting with other artists to get discouraged when they’re putting on a big show and I’m not. It’s a mental trap I’ve fallen into a number of times, and it’s never fun. But when I’m able to think that the only person I’m competing with is myself, then what other people do becomes a lot less important. And I’ve also learned that everyone, at least every now and then, has a show where everything clicks for them and it looks like all of their best clients are there. Conversely, we’ve all had shows where it seems like nothing is going well and nothing is selling. “That too will pass” was a good phrase to remember.

I don’t know how many shows I’ve done where somewhere along the line often on a Sunday afternoon where I haven’t made that much money at this point I’ll hear my negative internal dialogue start . Things like “why are you doing this”, “you should just sell everything and stop doing this stupid business” or “other people are so much better than you at it, and you will never be good enough to do what whatever. â€This is just a sample of the kinds of things that can go through my mind. But I’ve learned that my fortunes can change in an instant. I can’t count how many times long after this negative dialogue starts in my head, someone walks up and buys a big piece, suddenly putting me in the dark for the show. And even though it’s happened a number of times, it it’s always hard not to let myself fall into the dumps and start developing a shit attitude. But I’m learning that it only takes one person at the right time to make a difference. So why bother with the monologue negative interior?

It has been very valuable to me both in art festivals and in my career as a photographer in general. I think when I first started I was much more likely to view other photographers with a bit of disdain. But over time, I’ve learned that they’re kind of soul mates. Not everyone spends a good chunk of their free time photographing landscapes, and even fewer people then take that work and set it up in art exhibitions to try and sell it. There is a certain camaraderie there naturally, and several other photographers I have met on the show have become friends. I learned a lot from some of them.

Another positive side of working with other artists, regardless of the medium, is that I learned which shows to apply for and, conversely, which to avoid. Other artists who do festivals much more full-time than I often have valuable ideas in this regard.

So this is it. These are just a few of the things I have encountered and learned while striving to sell my work directly to the public at art exhibitions. If you are someone new to or planning to start doing this sort of thing, hopefully this overview is helpful or at least provides a reality check before you dive in.