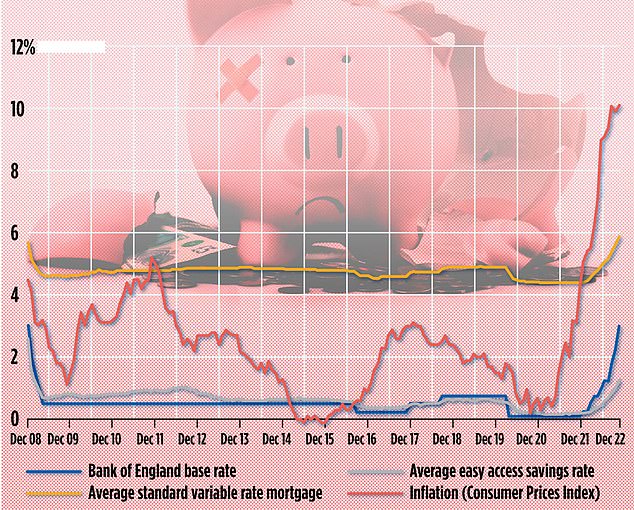 First, the good news. Savings rates are on the rise, reaching levels not seen in more than a decade. However, let’s not get too carried away. Once galloping inflation is taken into account, savers have rarely suffered so badly.

Last week, in response to inflation hitting a 41-year high of 11.1%, I asked Rachel Springall, finance expert at Moneyfacts, to do some math. Going back to the last time the Bank of England’s base rate was 3% (November 2008), I asked him to track four key rates and put them on a chart.

The results are presented in the graph opposite and tell their own story. Not only are savers’ deposits being ravaged by inflation, undermining their real value, but savings rates are also being deliberately suppressed by banks intent on maximizing their profits. The less banks pass on interest rates to savers as the base rate rises, the more profit they make.

Thus, in December 2008, Springall reported that the average Easy Access Savings Rate was 2.58% and the average SVR Mortgage Rate was 5.68%. Inflation was 4.5%.

Today, the respective numbers are 1.25% (outrageous), 6.49% (outrageous, even though most home loans are now fixed) and 11.1%. To use blunt financial language, savers are currently being had by the banks as they watch the real value of their savings being gutted by inflation.

If you need more proof on this, may I invite you to read our review of the JOHCM UK Equity Income investment fund. The managers of this fund have built large positions in banks – notably Barclays and NatWest. This is because they believe that companies will generate higher profits as long as interest rates remain high, allowing them (banks) to make money from the difference in interest they charge borrowers. and that they give to savers.

For the record, NatWest currently pays 0.5% on Internet Saver while Barclays pays 0.25% on balances up to £49,999 in Everyday Saver. A daily savings scandal.

You might say that rather than being a bank saver, you’d be better off buying their shares like JOHCM UK Equity Income did and reaping a mix of capital and income.

Risky, yes. But as they say: fortune smiles on the brave.

I’ve done some crazy things in my past to raise money for worthy causes: including ten marathons in ten days (262 miles) for the Brathay charity in 2012.

But that herculean task, which involved running for a total of 46 hours around Windermere in the Lake District, pales in insignificance to what rugby league legend Kevin Sinfield has just done.

Yesterday he rocked at Old Trafford in Manchester – during half-time in the men’s Rugby League World Cup final – after covering more than 300 miles in seven days. He did it to raise money for a number of charities involved in supporting people living with motor neurone disease (just last week former Top Gear presenter Sue Baker died of it) .

If you would like to donate, please visit the website: https://donate. giveasyoulive.com/fundraising/ kevin-sinfield-ultra-7-in-7-challenge. Don’t forget to add a gift aid. I sponsored Sinfield last week and took part in the Rob Burrow Leeds Marathon in May next year (Rob being a former teammate of Sinfield who is currently under the influence of the wild MND).

I’m a weakling compared to the mighty Sinfield, but I’m determined to do my little part to help those who help defeat MND and care for those living with the disease.

Surprise: an assistant kit instead of an iPad

A huge thank you to those readers who have contacted me in the past few days to tell me their stories of Amazon woes.

This follows up on my article a week ago about Hampshire-based Mike Oliver, who ordered two iPad Pros from the US tech giant and received a roll of chicken wire and Felix cat food instead. It was only after The Mail on Sunday got involved that Mike got the refunds he had been fighting for for a long time.

Paul Eden-Smith, from Nottingham, had a similar experience to Mike.

He ordered an iPad Pro and a keyboard from Amazon. While the keyboard arrived in a separate package, the other box contained two random children’s toys – a wizard in training gear and a frisbee. He’s spent the past two weeks communicating with Amazon infobots and via email — a process, he says, “worse than crawling over thumbtacks and razor blades.”

It was only in recent days that Amazon finally accepted responsibility for the shipping error and agreed to refund him for the iPad Pro he never received.

“Dealing with Amazon has been torturous,” the 63-year-old says. “You can’t talk to a human being when online conversations often end without rhyme or reason.”

Earlier this month, another reader ordered Mammut walking pants (UK size 8) from Amazon, only to be sent a 12 (US size 8). She returned them and ordered again, only to receive yet another size 12.

Back at the post office, she went, ordered a third time – and yes, you guessed it, another size 12 arrived. She received a £145 refund and was told to keep (dispose of) the trousers.

Another reader ordered an Apple iPhone and received a six-pack of Nivea deodorants – she is still fighting for a refund as she wants her to return the phone she never received.

But nothing beats the unexpected birthday present a 76-year-old woman received from her husband. Put it this way, it wasn’t the Dyson hair dryer he ordered, but the kind of steamy sex toy that Gwyneth Paltrow likes to promote.

On Friday, the husband said he got a full refund. As for the toy, it currently resides “at the bottom of a cupboard because we don’t know what to do with it”.

There are more Amazon incidents than I could point out, but you get the gist.

A whole week on the trains

It’s been a whole week on the trains. No strikes, but lots of delays – with fog to deal with (Monday) and rain to negotiate (most of the week).

Drowned rats came to mind on Tuesday as I waited patiently for the 6.27am train to arrive in Wokingham – drenched by a Berkshire monsoon.

At least I didn’t have rain pouring through the roof of the train like a commuter experienced, to his horror, riding from Chichester to London.

Some links in this article may be affiliate links. If you click on it, we may earn a small commission. This helps us fund This Is Money and keep it free to use. We do not write articles to promote products. We do not allow any business relationship to affect our editorial independence.