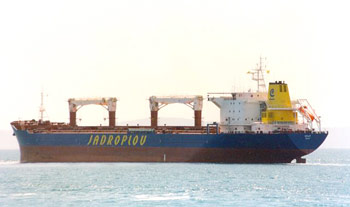 ZAGREB (Croatia), October 28 (SeeNews) – Croatian shipping company Jadroplov [ZSE:JDPL] said on Friday its net profit soared to 121.3 million kuna ($16 million/€16 million) in the first nine months of this year, from 29.6 million kuna in the same period of 2021, due to rising freight rates for bulk cargo in the global shipping market.

Turnover rose from 137.8 million kuna to 215.3 million kuna, Jadroplov said in a filing at the Zagreb stock exchange.

Excluding exchange rate differences calculated from its operations abroad, its net profit for the period January-September amounted to 76.8 million kunas, against 20.2 million kunas during the same period. period of last year.

At the end of September, his fleet consisted of five ships with a total of 242,727 dwt and an average age of 15.9 years, but on October 24, Jadroplov took delivery of the liquefied petroleum gas tanker, r Marko Marulic, built by the Japanese Sasaki Shipbuilding, which the company bought for 25.15 million dollars from the Swiss company Irus Holding. It is the first LPG carrier owned by a Croatian shipping company.

Shares of Jadroplov traded Friday on the Zagreb stock exchange up 0.67% to 75.50 kuna intraday.