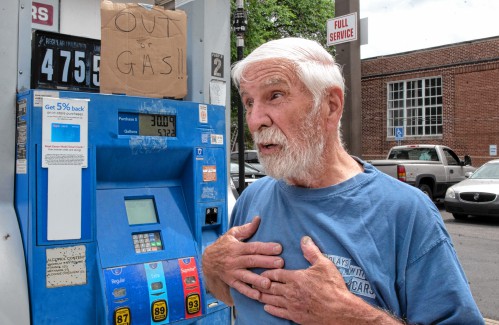 Gas station owner’s patience is running out in downtown Amherst

AMHERST — For 48 years, from the gas lines of the 1970s to rising retail prices during wars and after hurricanes, Reynold Gladu operated a downtown gas station supplying gas in a full-service format.

Gas sales, however, ended this month, possibly permanently, as Gladu and his employees emptied the last fuel from the pumps.

The decision to empty the tanks was made, he says, because he could no longer bear the high gas prices, which now exceed $5 a gallon in many places, and what he sees as deliberate attempts by oil companies to maximize profits at the expense of customers.

“I don’t want to be a part of this anymore,” Gladu said as he stood in the Ren’s Mobil Service parking lot at 161 North Pleasant St. on Tuesday afternoon, where cardboard signs with “out of gas” written above are placed. above the pumps. “This is the biggest scam that has ever happened to people in my life.”

Gasoline has averaged $5 a gallon or more in more than a dozen U.S. states, including Massachusetts, this week as fuel supplies remain tight.

Gladu’s decision to no longer offer gasoline could mean the end of the station he took over in 1973. While continuing to do oil changes, brake repairs and tire installations, among other jobs on vehicles in its three garages, Gladu acknowledges that it is unlikely that it will be able to stay open for long without selling gas.

The last gas he pumped was $4.75 a gallon for the cheapest grade, and he told his supplier he wouldn’t budge above that. “I tried to keep my prices as fair as possible,” Gladu said.

Over the years, Gladu has made a point of keeping its gas prices lower than competing stations, sometimes minimizing its own profit margins, and it has also fought changes that were demanded, as in the early 1990 when Mobil told him that he would replace the service garage with a convenience store. Support from the community, including local school children, prevented this from happening and he eventually took over the lease of the property.

“Dealing with Mobil, they no longer think about their pricing policies,” Gladu said. “I served their product, but I refuse to do it anymore, because they just get richer.”

Julie King, head of media operations for ExxonMobil Corp. wrote in an email that the price at the pump is out of his company’s control.

“Gas stations are privately owned and price their fuel based on local market competition and other business factors,” King wrote. “Prices at the pump are influenced by the price of crude and the wholesale price of products which fluctuate depending on demand and supply factors – such as economic conditions and seasonal factors, fuel production, inventory levels, storage and transportation costs.”

Additionally, King noted that Mobil gas is supplied by a brand name wholesaler. Gladu said he was dealing with a Wilbraham-based supplier.

Still, Gladu said he was standing up for what he believed was right.

“Enough is enough,” Gladu said. “People shouldn’t have to pay these prices to go to work, go to church or do what they have to do. It seems the oil industry is in the same boat.

As customers stop to refuel their vehicles, they soon realize that they will have to go elsewhere.

“A lot of people stop to offer me their condolences, but I feel really sorry for them because some of them have been my clients for almost 50 years,” Gladu said.

Why have gasoline prices risen again and why is there no relief in sight?