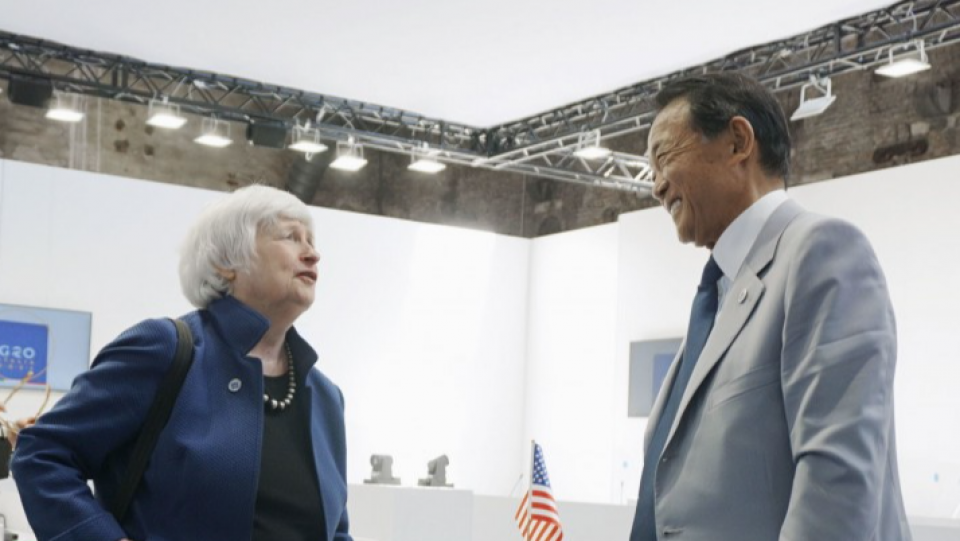 CFOs of major Group of 20 economies are expected to back plans to set a global minimum corporate tax rate and other new rules to tackle tax evasion by multinational companies when they conclude their talks later Saturday.

Their approval is likely to give a boost to efforts to finalize a deal in October, ending years of multilateral negotiations to update the century-old international tax system. The measures are also expected to help governments raise revenue to invest in their recovery from the coronavirus pandemic.

The G-20 could also assert the importance of faster vaccine distribution, as leaving developing countries behind in vaccine availability makes their populations vulnerable to the virus and could allow contagious variants to occur. ’emerge and ricochet the world, eventually stifling the global economic recovery.

Japanese Finance Minister Taro Aso (right) and US Treasury Secretary Janet Yellen meet on the sidelines of the Group of 20 meeting in Venice, Italy, July 9, 2021. (Photo courtesy of the ministry Japanese Finance) (Kyodo)

The two-day meeting in the canal city of Venice, Italy, brought together Japanese Finance Minister Taro Aso and US Treasury Secretary Janet Yellen, among others, making it the first in-person gathering of ministers from the Finance and Central Bank Governors of the G-20. since the pandemic started to accelerate early last year.

The talks took place roughly a week after broad agreement was reached by 130 countries and regions on a two-pillar package on international tax reform – introducing duties on the world’s largest and most profitable companies, including the IT giants, as well as a minimum tax rate of at least 15 percent.

The deal, now backed by 131 economies, is the result of working talks coordinated by the Organization for Economic Co-operation and Development.

Gaining the support of ministers from the G-20, which brings together the major industrialized and developing economies, is seen as a vital step in securing final approval at the leaders’ meeting scheduled for late October.

In a statement to be issued by the G-20 chief financial officers, participants may seek to give new impetus to the process by urging more countries to sign the agreement.

Eight countries that participated in the OECD negotiations have yet to do so, including Hungary and Ireland, whose low corporate tax rates have apparently been attractive to businesses.

As part of this plan, the so-called Pillar 1 intends to change existing tax rules that have been strongly linked to a company’s physical presence, as digital commerce has enabled companies to achieve profits in low-tax countries, no matter where their customers are located.

The new rules would “reallocate” tax rights on multinationals more equitably between countries, meaning that large companies will have to pay taxes in countries where they have actual business activities and make profits.

About 100 multinational companies, and possibly several Japanese companies, could be subject to the new tax.

The second pillar, or the global minimum corporate tax rate, will seek to put a floor on competition between countries to offer the lowest rate to attract business.

The OECD has estimated that under the first pillar, the rights to tax over $ 100 billion in profits will be reallocated to market jurisdictions each year, while the second pillar will generate around $ 150 billion in tax revenue. additional global each year.

The Paris-based organization said an October deadline has been set for finalizing the remaining “technical work”, with the aim of implementing the new rules in 2023.

Efforts to reach a deal have gained momentum in recent months after the US administration of President Joe Biden, which seeks to revive multilateralism, proposed that the minimum corporate tax rate be at less 15% in the world.

The American idea also seems to have resonated well among industrialized countries in the Group of Seven which have seen their fiscal health deteriorate due to increased spending to support their economies hit by the pandemic.

Carvana Co Stock Gives All I