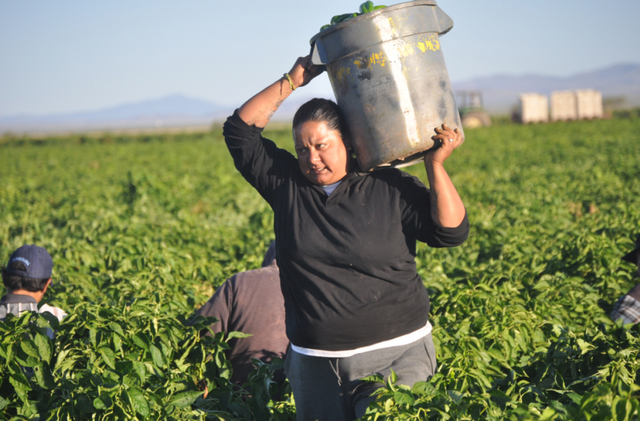 Do you think it’s hot? Ask a farmhand

Chances are you’ll be spending most of your time today inside an air-conditioned building.

At some point you will eat. And if it’s vegetables or fruits, chances are overwhelming that farm workers need hard work to harvest.

Considering that more than 50% of this country’s vegetables, nuts, and fruits come from California — mostly from the San Joaquin Valley — you get a pretty good idea of ​​what it’s like to work outdoors.

It’s not the kind of work you can do at night. The harvest takes place during the day, including when the heat reaches its zenith. There is a limited window to harvest food.

Now imagine what would happen if you were told your pay was going to be reduced from $1.40 an hour to $1.25 an hour for working in the fields. In reality, the salary was less. It was 90 cents an hour plus 10 cents per ton picked before unscrupulous agricultural contractors and commercial farmers subtracted things like paying 25 cents for a cup of water. It happened in 1965. Two large corporations that owned table grape vineyards as a small part of their holdings decided they needed a bigger profit margin.

This is what sparked the grape boycott 57 years ago. First, the Farmworkers Organizing Committee – made up mostly of Filipino workers – went on strike when big producers in Delano cut wages. They were joined within a week by the National Farm Workers Associated led by a young Casar Chavez. Soon they joined forces as the United Farm Workers.

What followed was the most effective labor boycott in California history. At one point, 12% of consumers nationwide said they no longer buy table grapes.

In March 1966, the UFW embarked on a 340-mile march from Delano to Sacramento to pressure the state to enforce laws that had been in effect for years to protect farmworkers but were largely ignored. .

One of the overnight stops they made was in Manteca. They set up a temporary camp at Southside Park, just south of downtown.

At the time, many producers in the region weren’t exactly enamored with UFW, fearing further pressure on their ability to earn a living. It’s ironic in a way considering that several farmhands over the years have considered San Joaquin County growers to be some of the best to work for.

In reality, producers who are family farms and not a cog in a society and farm workers are at the mercy of big corporations like Walmart and food processing giants.

As trade titans fight for market share, one strategy they most often deploy is to put pressure on suppliers or, in the case of products, producers.

This pressure in turn trickles down to workers in the field.

It is ironical. The Walmarts, Apples, Googles, and Amazons of the world judge their success by how much they can increase their profit margin while only doing business with the concerns that will squeeze their profit margins to retain their business.

When this pressure is applied to a labor-intensive area, such as growing food, the only real reduction that can take place is in the cost of labor. Walmart has a reputation for having no qualms about corporate actions that ultimately hurt poorer Americans.

The most poignant examples over the years have been companies hiring Walmart to clean their stores that required the same labor they used, but paid less. Contractors were able to make this work like magic by hiring illegals whom they paid less than the prevailing minimum wage Wal-Mart had to pay when they hired their own guards.

Of course, Walmart denied any knowledge of any such wrongdoing on the part of any contractors or subcontractors, even though it wouldn’t have taken long to figure out that it was impossible to wok while being legally compliant with wage and labor laws. The fines companies like Walmart ultimately receive are so small compared to their hourly profits that they are considered a cost of doing business and very profitable.

Of course, we are not helping the situation.

Americans may be complaining more about rising food prices than anything else. But the truth is that virtually every year since 1930, according to United States Department of Agriculture tracking, we’ve been spending less and less of our household income on food.

We have no problem shelling out big bucks for gadgets and electronics, but for basics like food, we have a cow if a loaf of bread goes up a dime.

And when it goes up a penny, the last to profit – if they ever do – are the farm workers followed by the producers.

This column is the opinion of the editor, Dennis Wyatt, and does not necessarily represent the opinions of the Bulletin or 209 Multimedia. He can be reached at [email protected]

Steris (STE) up 1.5% since last earnings report: can it continue?

New to investing? These 5 Stocks Make an Outstanding Beginner’s Portfolio