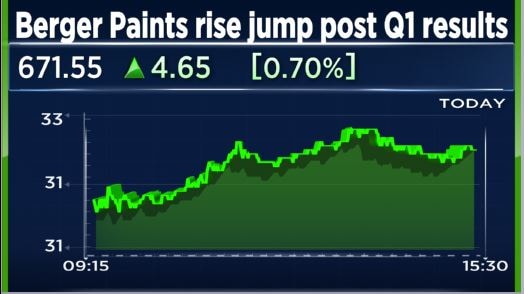 Shares of Berger Paints extended their gains on Friday, a day after the paintmaker released its financial results for the April-June 2022 quarter, in which it posted a massive increase in profits and revenue. .

Shares of Berger Paints extended their gains on Friday, a day after the paintmaker released its financial results for the April-June 2022 quarter, in which it posted a massive increase in profits and revenue. .

Shares of the paint maker jumped 2.7% in early trades and were trading up 0.7% at Rs 671.80 as of 10:24 a.m. Although shares of Berger Paints have enriched investors nearly 17% in the past month, in 2022 so far (year to date), they have wiped out more than 13% of investors’ wealth. compared to the benchmark Sensex index which declined by one percent during the period.

Friday’s rise in the paint maker’s shares comes after the company posted an 80.60% increase in consolidated net profit to Rs 253.71 crore for the first quarter ended June 30, 2022. During the same quarter a year ago, the business recorded a net profit of Rs 140.48 crore.

Berger Paints’ operating revenue for the first quarter of the fiscal year also saw strong growth at Rs 2,759.7 crore, an increase of more than 53% from the revenue of Rs 1,798.5 crore that the company recorded in the corresponding quarter of last year. This comes as the company told CNBC-TV18 decorative volume growth was 35%.

The company’s earnings before interest, tax, depreciation and amortization (EBIDTA) stood at Rs 404.8 crore, a jump of almost 70% from the previous quarter.

EBITDA margin – the amount by which a company’s operating revenue exceeds its costs – rose 140 basis points year-on-year to 14.7% in the three-month period. Gross margin for the quarter under review, however, slipped to 35.7% from 38.6% in the same quarter last year.

Dipan Mehta, Director of Elixir Equities, believes that although Asian Paints is what drives the paint industry, Berger Paints cannot be far behind.

“It’s an aggressive company and somewhat similar mold to Asian Paints with a large proportion of decorative paints in its portfolio. I think it’s only a matter of time before this company starts to rally” , he told CNBC-TV18.

Mehta suggests that investors should keep in mind that Asian Paints, Berger Paints and Kansai Nerolac Paints are all expensive and whether these volumes will be maintained in the future for these companies when they see emerging competition to be seen.

He expects earnings to be more or less in line with expectations with 15-20% growth. He was more concerned about the price/earnings ratio, which still remains quite high despite all the changes going on within the industry.

ConsolidationNow has been revamped as RixLoans Payday