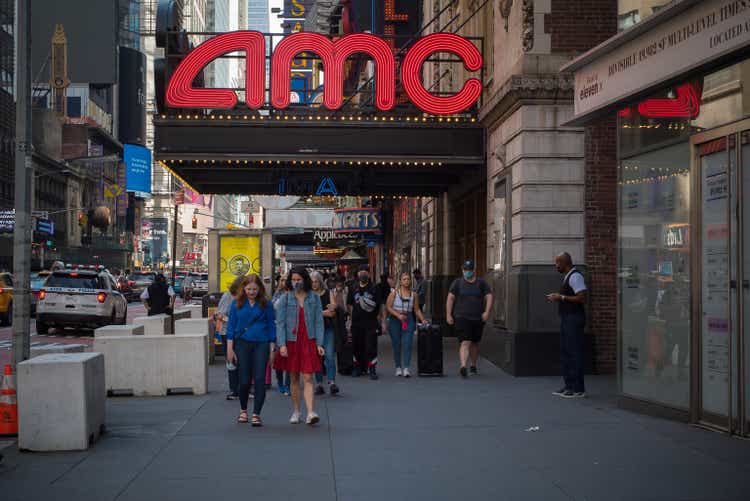 AMC: the obsession must stop because it burns its money

Top Gun Maverick was released on May 27.e, and since August 14e, it had exceeded $1.37 billion in worldwide box office earnings. AMC Entertainment Holdings (New York Stock Exchange: AMC) Q2 2022 results including Memorial Day weekend and all of Top Gun Maverick’s June revenue being shown on their premises, and again, they couldn’t make a profit. The obsession with AMC stock needs to end. Hit movies like Maverick happen once, and a blue moon like maverick just surpassed Titanic as 7e highest-grossing movie of all time. I’m not saying AMC is headed for Chapter 11, but it’s an unprofitable company that can’t even turn a profit when one of the greatest movies in history hits its theaters. . I think AMC is incredibly overvalued, they will have to do a capital raise in the next year, and the chances of them reaching the point of sustained profitability seem slim. All investors with the diamond hands mentality should take a step back and look through AMC’s financials. The short interest sits around 18.45% (per Seeking Alpha), so a short squeeze is possible, but as a long-term investment, AMC doesn’t look good as further dilution is almost unavoidable.

AMC doesn’t make money, and I’ll take a numbers-driven approach on an annual and quarterly basis

I am agnostic towards AMC, have no feelings towards the company, am not an investor and never will be an investor. I’ll start with a quarterly review of AMC’s finances.

Keep in mind Q2 had Memorial Day weekend and Top Gun 2 Maverick. AMC generated $1.17 billion in revenue, and its cost of revenue was 85.37% of what it took in. To generate the $1.17 billion in revenue, it cost AMC $995.8 million. This does not include operating expenses, interest or taxes. AMC had $170.6 million in gross profit remaining, representing a low gross profit margin of 14.63%. AMC’s total operating expenses were $186.8 million, placing its operating profit at -$16.2 million. After interest expense, taxes and other items, AMC generated negative net income of -$121 million.

When you look at AMC on a yearly basis and use the Last Twelve Months (TTM) for 2022, the picture doesn’t get any prettier. 2018 and 2019 were AMC’s strongest years from a revenue perspective, as it generated $5.06 billion in 2018 and $5.02 billion in 2019. AMC lost money between these 2 years. In 2018, AMC made a net profit of $110.1 million; in 2019, AMC lost -$149.1 million in net income. This is a company that over the past 11 years has been 6 years in profit and 5 years lost money. Over the 6 years that AMC generated a profit, its cumulative profit was $808.9 million at an average of $134.82 million per year. The last year AMC generated a profit ($110.1 million) was in 2018, and its cumulative revenue for the years it generated a profit was $18.68 billion. AMC’s profit margin during those years was 4.33%. Factoring in 5 years of negative earnings, over the past 11 years AMC has lost -$6.5 billion out of $35.29 billion in revenue. While AMC may never fall below, these numbers are upside down and the current valuation of $9.31 billion doesn’t make sense because AMC is unprofitable and its balance sheet is undervalued. optimum.

AMC’s CEO used to talk about AMC’s cash hoard on his balance sheet, and in previous AMC articles I’ve indicated that his cash position will shrink as it’s used to fund operations. Over the prior year, AMC’s cash position decreased by -$846 million or -46.71%. This is not the only problem with his balance sheet. At this rate, AMC will burn through its remaining cash over the next 5-6 quarters if business metrics do not improve or AMC does not commit to a capital raise.

AMC has total debt of $10.46 billion, negative book value, negative equity, declining cash reserves and depleting assets. AMC does not generate profit, and the only way for me to keep them afloat is to issue shares and raise capital. AMC’s business model has not proven to generate sustainable profits, and its costly business expenses make it difficult to at least break even.

AMC is an enigma, and the investment premise doesn’t make sense. Shareholders do not view AMC as a rational investment and cling to Diamond Hands praise as if it were a religion. Adam Aron, on the second quarter call, announced AMC’s plan to issue a special, non-dilutive AMC preferred stock dividend. AMC will issue a 1:1 stock dividend of one new AMC preferred stock unit to common stockholders. Adam Aron obviously has a sense of humor because the new preferred stock will trade under the ticker symbol (APE), which he says stands for AMC Preferred Stock. Insight couldn’t have worked better for him. The number of AMC commercial shares issued and outstanding will remain unchanged at 516,820,595 after the payment of the dividend.

Adam Aron has in the past indicated that AMC will not issue more AMC stock unless shareholders deem it necessary. At the bottom of the earnings call, he said:

“Given the flexibility the ability to issue more APEs will give us, we believe we would be able to easily raise funds if we choose to, which significantly reduces any risk of survival as we continue to blaze a trail through this pandemic towards recovery and transformation.

While issuing APE as preferred stock on a 1-to-1 basis is not initially dilution, Mr. Aron made it clear that AMC will have the ability to issue more APE. Mr. Aron described EPAs as a currency that can be used in the future to further strengthen the balance sheet. Given that Mr. Aron has not declared any further common stock dilution, I believe this is a way for AMC to raise capital without breaking that promise. His comment certainly supports that notion.

I don’t believe AMC has a choice, and the newly minted APE stock will eventually get diluted. I also think the investment community will abandon them and that will keep AMC afloat. AMC’s only decision is to raise funds in the capital markets, as its inability to generate FCF or earnings weighs on real activity.

AMC’s cash position is depleted, and one of the highest-grossing films of all time couldn’t lift AMC into positive territory in the second quarter. AMC’s balance sheet continues to be at suboptimal levels, and its equity and book value are negative. I think AMC is very overrated, but that doesn’t mean following Blockbuster’s path is in their future. AMC has just announced APE shares as a preferred capital vehicle and has indicated that this will allow AMC to raise funds in the future. I think AMC will issue more APE shares in the future, which could help deleverage its balance sheet and rebuild its cash. The longer-term problem is getting AMC to maintain profitability, and I don’t see a path to achieving that anytime soon.